Fire Ants in Florida: What to Know

Fire ants, often called “red imported fire ants” originate from Brazil but were introduced to the United States around 1940. Since then, they have spread throughout much of the southeast, including right here in Florida. Because these pests can pose a serious threat, it’s important to know how to recognize them as well as how to stay safe from their painful stings. Learn more with the ant control experts right here at Florida Pest Control!

Fire ants measure from 1/8 – ¼” and are a dull red color. Fire ants are most known for their stinger, which in accordance with their aggressive nature, can lead to bad encounters. Fire ants are best recognized by two bumps that they have between the abdomen and thorax.

The easiest way to identify fire ants is through their mounds. These mounds range in size—some are small bumps, others can be up to 18 inches high. If you run into a fire ant mound, it won’t feature an opening on the top like other ant mounds. A mound that is about 7 inches high can house over 200,000 ants, which is precisely why these ants pose such a huge threat.

Fire ants differ from your typical house ant in a number of ways. The most important things to know about these potentially dangerous pests include:

Fire Ants in Florida: What to Know Serving Central FL, Northern FL and the Panhandle 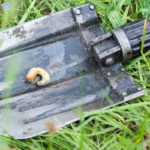 What's the Difference Between Bee Stings vs Wasp Stings? What to Know About Lawn Frost in Florida