The adult female Lone Star Tick displays a white spot near the center of her back while the male has white streaks or spots along the margin on the top side of its body. They are found throughout most of Florida and the Southeastern United States with populations spreading to the Midwest and the Northeast.

A female Lone Star Tick can lay up to 5000 eggs all in one sitting. Imagine seeing thousands of tiny seed ticks emerging all at one time, but that’s what happens day after day. You can see right away how populations can get out of control and why they are spreading to new areas so rapidly.

Lone Star Ticks have three life stages (larva, nymph and adult) and must feed on a host before moving on to the next stage. Upon hatching, the six legged larvae will feed mainly on mammals and birds. They rarely, if ever, feed on small rodents. The nymphs will feed on birds, small rodents and other mammals. Adult Lone Star Ticks host on medium to large mammals, but will also feed on wild turkeys and rodents.

Lone Star Ticks are known to carry several pathogens including Rickettsiosis, Ehrlichiosis and Tularemia. They have also been said, by some scientists, to be carriers of Southern Tick Associated Rash Illness (STARI).

There have been many red meat allergies reported over the past several years that are said to be associated with Lone Star Tick bites. Symptoms are swelling, hives, problem with breathing, diarrhea, vomiting and a drop in blood pressure. Scientists say that Lone Star Ticks have a sugar in their system that humans don’t called alpha-gal. This same sugar is found in red meat. When the tick bites, it transmits this sugar which triggers a response from our immune system which in turn sends out antibodies to deal with it. Then later, when a person eats red meat, an allergic reaction could develop.

If you’re concerned that you may have Lone Star Ticks or any other tick species on your property, contact the Florida Pest Control office nearest to you. We’ll be glad to come out and perform an inspection. Most Common Bugs Found in Florida 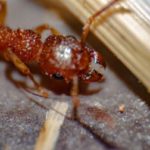