Home
Pest Control
Blister Beetles Can Be a Pain in the Neck!

Many of you have probably seen these handsome beetles on flowers, never realizing their medical and veterinary importance (more on that later).  Blister Beetles belong to the family Meloidae, which is estimated to contain about 3000 species worldwide, out of which 400 species are found in North America.  Florida is fortunate enough to have only 26 species. Their larvae feed mainly on other insects and some on the eggs of certain grasshoppers, which makes them somewhat beneficial.  But some may hitchhike on a bee (known as phoresy) and ride back to her nest where they will feed on the food meant for the bee larvae and sometimes even eat the bee larvae, as well.  How can such a good insect go so wrong!  The adults are herbivores, feeding on pollen, nectar, flowers, and leaves. But wait, there’s a much more insidious and sinister side of Blister Beetles!  Their blood contains a toxic irritant called cantharidin and is known to be troublesome to both man and beast.  This natural compound protects them from many predators.

Only the male produces cantharidin.  The female receives it when she accepts the male’s sperm packet.  She is given enough to help protect her and her eggs.  That’s all good and well for the beetles, but now for the bad news.  Because some species of Blister Beetles feed on alfalfa, many may be baled up during harvest time.  When livestock, including horses, feed on this alfalfa, they may become sick and even die! So how did they get the name Blister Beetle?  Read on. The beetle shown here is a Bronze Blister Beetle (Lytta polita).  There’s nothing polite about this beetle though!  It’s a somewhat harmless beetle that feeds on pine pollen and pollen from various fruit tree flowers.  I set up a UV light to draw in moths and beetles one night.  What I didn’t expect was a dozen or more Bronze Blister Beetles crashing the party.  I brushed several off me while I was photographing the moths.  Apparently, one took issue with that and slimed me with cantharidin.  This chemical is released through leg joints.  The result is what you see in the photo below.  By the way, that’s the left side of my neck, hence the name…Blister Beetle.

Blister Beetles Can Be a Pain in the Neck! Serving Central FL, Northern FL and the Panhandle 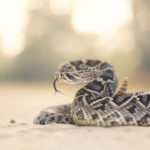